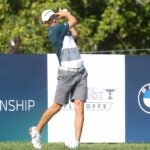 Jordan Spieth hopes to turn his game around at 2021 BMW Championship.

The 2021 BMW Championship, the second event of the FedEx Cup Playoffs, begins Thursday, August 26, at Caves Valley Golf Club in Maryland. Here’s what you need to know to watch the first-round action on TV or online.

While many surprising players were knocked out of the playoffs following last week’s Northern Trust, most of the biggest names in the game are still in the running as the opening round of the BMW gets underway on Thursday.

That’s without mentioning the player currently in the FedEx Cup Playoffs driver’s seat, Northern Trust winner Tony Finau. Even Phil Mickelson, whose PGA Championship win in May feels like a lifetime ago, has a tee time, though, at 70th in the standings to start the first round, he was the last player who qualified. But for many players like Mickelson, this is the last chance to put on a show and make it into the Top 30, thus securing a spot in the season-ending Tour Championship.

Below you will find everything you need to watch the first round on Thursday.

How to watch BMW Championship Round 1 on TV

Golf Channel will carry the first round of the 2021 BMW Championship with four hours of coverage from 3-7 p.m. ET on Thursday.

How to stream BMW Championship Round 1 online

You can stream the first round Golf Channel TV coverage of the BMW Championship on golfchannel.com. Fans can also view Featured Group coverage of the opening round all day Thursday via PGA Tour Live with a subscription.

How to bet on the BMW Championship

Looking to make a (legal!) wager yourself? We teamed with BetMGM, and the online sportsbook is offering a “Bet $20 Win $100” promotion regardless of your wager’s outcome, as well as a “Risk-Free Bet” up to $1000.

As managing producer for GOLF.com, Cunningham edits, writes and publishes stories on GOLF.com, and manages the brand’s e-newsletters, which reach more than 1.4 million subscribers each month. A former two-time intern, he also helps keep GOLF.com humming outside the news-breaking stories and service content provided by our reporters and writers, and works with the tech team in the development of new products and innovative ways to deliver an engaging site to our audience.