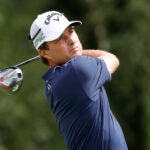 Kisner found himself with a broken driver after a range mishap.

It’s often said that PGA Tour players don’t play the same game that amateurs play. That goes for the physical shots they hit, their mental capabilities, and such things as simple as how they hit practice balls on the range.

PGA Tour players are known for having the ultimate the control over their golf ball and clubs. When they swing, they know the plane their club will travel on and how the ball will fly — for the most part, at least. As such, most pros have full trust in their competitors to not cause injury or harm, whether it’s on the golf course or the range.

With 150-plus players in a given field each week, that sometimes means players pack into driving range slots like sardines. And there’s rarely an issue with clubs colliding or a player taking a shanked ball off the backside. As Kevin Kisner famously says, this ain’t no hobby.

Prior to winning the 2021 Wyndham Championship, however, Kisner collided drivers with Matt Jones on Friday morning while warming up on the range for his tee time. In case you’ve never seen Jones hit balls on the range or play golf, he has an incredibly fast trigger, which likely threw Kisner’s timing off. Either way, the Kisner-Jones club collision was severe enough that it sent Kisner’s driver to the bench for the remainder of the week, causing him to use a backup.

Typically, a driver malfunction wouldn’t be too much of a problem since PGA Tour players have plenty new equipment handy, except that Kisner employs a Callaway Great Big Bertha driver from 2015. Those aren’t so easy to find.

“At 7:39 am on Friday morning, [Kisner texted me], ‘I just connected with Matt Jones’ club on downswing with driver, and crushed my driver,’” Watson said. “So [Kisner] instructed me to scour various websites and other people that I might know that have [a Great Big Bertha head].”

As it turned out, Watson’s brother had “three or four heads,” and his brother-in-law had an extra head, too. Kisner was able to finish the Wyndham Championship – where he won in a six-man playoff – using a backup version of his trusty Great Big Bertha driver.

Of course, this begs the question, ‘Why is Kisner using a driver from 2015?’

Well, back in 2020, I asked Kisner that very question on our Fully Equipped podcast. Here was his answer:

“If you hit one bad shot and you don’t know what happened or why, and think for one second it may be equipment related it can totally screw you up for the rest of the round,” Kisner told Fully Equipped. “If you know what you have, I like to stick to it…the Great Big Bertha, for some reason, has always just done exactly what I’ve wanted it to do. If I hit it in the heel, it’s a little cut. If I hit it on the toe, it’s a little draw. And that’s all anybody wants is for a club to perform the way they expect it to.”

While thankfully everything worked out in the end, and no one was injured, there are a few important lessons to be learned.

Lesson 1: Be aware of your surroundings on the range and the golf course at all times. Don’t put yourself or others in harm’s way when swinging a golf club. They can cause damage to equipment, and can certainly cause injury, as well. Even the pros don’t have full control.

Lesson 2: Play with golf clubs that work best for you, not because anyone else is using them. Kisner knows what works for him, and it will help your game immensely to learn what’s truly best for you by consulting a professional fitter.

Lesson 3: If you’re using an older club model, make sure to have a backup ready should anything happen to it. Old equipment isn’t as easy to replace as new equipment, so be prepared!

Want to overhaul your bag for 2021? Find a fitting location near you at GOLF’s affiliate company True Spec Golf. For more on the latest gear news and information, check out our latest Fully Equipped podcast below!

Andrew Tursky is the Senior Equipment Editor at GOLF Magazine and GOLF.com.