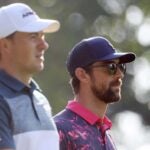 Jordan Spieth and Michael Phelps played together in a pro-am Wednesday at the BMW Championship.

Jordan Spieth was his typically honest self Wednesday when talking about 18-hole pro-am events during tournament weeks. Tour pros don’t exactly love them. They prefer the 9-holers, especially the day before a tournament begins.

But Wednesday’s event was different. Spieth was paired up with Under Armour CEO Kevin Plank and the most decorated Olympian of all-time, Michael Phelps.

Phelps and Spieth have known each other for over a decade now, both being UA-sponsored athletes, even doing promotional events together.

Back when Spieth was the no. 1 player in the world, when he was bagging majors and victories left and right, he may not have been as interested in leaning on the advice of a swimmer. His sport asks you to avoid the water as much as possible, anyway. But apparently that has changed. Phelps has become a bit of an asset whenever Spieth needs to reach out.

“I pick his brain on the mental side of things now,” Spieth said. “He’s getting very involved in mental health, and it’s been something that I’ve actually worked on a lot in the last few years, and that’s been a space that probably should be talked about more within athletes, their experiences across different sports, too. I’ve been really fortunate that he’s lent an ear and also bounced ideas off me.

“Without getting into details that are competitive advantages, I think he’s been a fantastic kind of friend, and we’ve been able to spend time down in Mexico separate from the brand, too, and get to know his family. Again, to have a golf lover be the most decorated Olympian of all time, it’s really good for our sport, and it’s even better that I’m able to access it, as well.”

He’s right about the golf-lover part. Like many ultra-competitive former pro athletes, Phelps is as avid as golfers tend to get. He was there walking inside the ropes with Tiger Woods at the 2018 PGA Championship at Bellerive. He was there behind Woods during his epic approach into the 16th at Augusta National during the 2019 Masters.

He sports a 12 handicap and had Spieth raving about his ability to hit shots under pressure Wednesday. He also isn’t afraid to remind folks just how many medals he’s won during this career. That’s 28 for those keeping track at home.