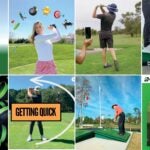 Golf instruction used to be pretty straight forward, but now it comes from all directions online.

Baden Schaff had been teaching golf for years when he came to the sobering conclusion that traditional golf instruction simply didn’t work. By that he meant the practice of standing on the range, hour after hour, attending to a steady parade of students, assessing their swings and sending them off with this or that suggestion along with a plan to maybe meet again.

As Schaff saw it, the flaws in this arrangement cut both ways. Swing changes are tough sledding, even for top players. Would the students even practice? Would they practice the right things? Without steady supervision, there was little guarantee. The more likely outcome — Schaff ran up against it often in his work as a PGA teaching professional in Singapore, London and his native Australia — was a kind of stasis: At the next lesson, if and when it happened, the process would start right back at square one.

In this lose-lose situation, students got shortchanged but so did instructors, who might earn a decent living but miss out on the rewards of doing greater good. Then there were the strictures of the marketplace itself. This, too, nagged at Schaff. Why should students be limited to teachers within easy geographic striking distance? And wouldn’t those teachers want a broader audience than those who could make a face-to-face?

“It was obvious to me that the entire system was fundamentally broken,” Schaff says. “There had to be a better way.”

Like other disruptors, Schaff put his mind to a virtual solution. In 2016, in partnership with Alan Gao, a golf-obsessed buddy with a gift for coding, he founded Skillest, an online platform that marries the efficiencies of digital instruction with the social connectivity of a dating site. Logging onto the Skillest app, first-time users fill out a questionnaire and then get directed to a roster of instructors, who post their prices and profiles. Once a match is made, the parties settle on a level of commitment. They might connect just once — the online equivalent of grabbing coffee — or start going steady through a monthly subscription that lets students tap their coaches as often as they want. Recorded swing videos and analyses fly back and forth, but lessons can also be livestreamed. And if a breakup happens, no hard feelings. There are other fish in the Skillest sea.

“It’s turning into Peloton,” Schaff says. “You don’t have to leave your home to learn from the world’s best coaches, and those coaches are building their business and expanding their reach.”

Five years in, Skillest has more than 70,000 students, 1,500 instructors (some 1,000 teachers are on a waiting list) and a growing presence on a high-tech frontier that is revolutionizing the way teachers teach and students learn. Where golfers once looked for answers in the dirt, many now find them in the ether, unearthing a wealth of information that used to be reserved for the best players in the world. The emphasis isn’t just on swing mechanics. Name the area of improvement: club selection, strategy, mental strength and on. Using club-embedded sensors, algorithm-driven apps, computer-generated avatars and other advents, the digital age is pushing forward on all fronts.

By different means and measures, companies like Arccos, GolfLogix and GolfMetrics allow amateurs to track Strokes Gained and other performance stats that Tour pros lean on to get a detailed picture of their play. Golf Blueprint, for its part, mines mountains of such data, mulls it over and gets back to golfers with fun but hyper-focused practice plans. Golf Blueprint’s cofounders, Kevin Moore and Nico Darras, are both skilled players, but neither claims to be a golf instructor. They are academics, with combined backgrounds in math, psychology and education, all fields they bring to bear in their burgeoning business.

“We’re just a couple of golf sickos who happen to be major nerds,” Darras says.

It appears that nerds have valuable knowledge. On average, Darras and Moore report, Golf Blueprint clients shave 2.7 strokes from their scores in the first three months.

Sportsbox is a brainy operation, too, but its intelligence is artificial, with an expertise in 3D motion capture. As you swing, its A.I. picks up readings from 39 points on your body to generate a fleshed-out image of your action — the power of a K-Vest packed into a mobile phone, though Sportsbox takes things further by giving you a battery of drills to work on. The technology is near the end of beta testing and set to launch this summer.

“If you really want to understand what you’re doing, you need 3D data,” says Sportsbox CEO Jeehae Lee, a former LPGA player and ex-Topgolf exec. “We know how helpful it is, but until now not a lot of people have had access to it.”

That’s true of other high-end technology as well, such as launch monitors and swing simulators, both of which have dropped enough in price that you don’t need to take a second mortgage to acquire them. A GOLFTEC session costs even less. As the largest teaching and clubfitting operation in the industry, the company offers all the bells and whistles at more than 200 locations around the world. And if you want that technology to come to you, newly launched Dryvebox has a growing fleet of Trackman-equipped trailers that double as mobile teaching studios.

Still, in this democratizing wave, the strongest force at work is social media. Instagram brims with free swing tips from an army of instructors. Some are household names, ranging from Sean Foley and Claude Harmon III to the equipment-maker Callaway, which, in its Insta Golf Tips series, has been posting pointers from staffers going on two years now. Other Instagrammers are iconoclastic up-and-comers, like Jake Hutt, a former hockey player and musician (he’s also a Dryvebox cofounder) who delivers spot-on insights through hip-hop tunes he writes and sings. Over on YouTube, another world of revelations awaits. Do you like your golf instruction as edutainment? You might try Me and My Golf, an engaging channel where Piers Ward and Andy Proudman pair incisive tips with trick-shot demonstrations.

If, on the other hand, you’ve always dreamed of mastering Moe Norman’s one-plane swing, Todd Graves, a Norman protégé, would be your guy. And let’s not forget — ahem! — GOLF.com, with its three-days-a-week Play Smart column and a constantly refreshing archive of video instruction from some of the best teachers in the world.

It is, after all, never too late to change. Not only can old dogs learn new tricks, they can pass on hard-earned wisdom in fresh formats. Take Franklyn Richards, aka @BritGolfDad, a retired teaching-pro-turned-TikTok-star who gives virtual lessons in impeccable Queens English from the greenery of his backyard.