Is it poor form to hit a conceded putt? 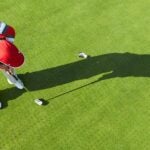 Your opponent just conceded you a putt. But can you roll it in anyway?

Conceding a putt in match play is widely regarded as a sporting gesture. Yes, it can also be a strategic ploy (you give one early when the mood is light, and then refuse to do so later, when the pressure is on). We all know it’s a great feeling when you hear, “That’s good,” from your playing partner, and you can scoop up your ball and move on, but now let’s flip the scenario.

What if you concede a shortie, and your opponent steps up and putts the ball anyway? Is that poor form on your opponent’s part? A few weeks ago, the Etiquetteist saw tensions rise in a match between two friends when Player A conceded a putt and Player B, after acknowledging the concession, went ahead and rapped the ball into the hole.

Player A was peeved and said so.

In his view, Player B had not only failed to uphold his side of the bargain (disrespectfully ignoring Player A’s wishes), he’d also crossed the line by slipping in a bit of mid-round practice.

Did Player A have a legitimate beef? Not according to the letter of the law.

Under the Rules of Golf, putting out after a concession is fair game; nothing forbids it. The concession stands regardless of the outcome of the putt. The one exception comes in four-ball match play, if a player putts out after a concession and doing so gives his partner an advantage. In that case, the partner (the one who didn’t hit the putt) is out of the hole, and the score of the player who stroked the putt stands for the side.

But those are the written rules. What about the unwritten codes of conduct? Is it bad etiquette to putt out when your opponent tells you to pick it up? That’s where it can get a little sticky.

The game has no shortage of self-proclaimed purists who bristle if you stroke a putt they have conceded. Doing so, in their eyes, is something of an insult, an affront to the fellowship that underlies your match.

“I said it was good. You should have accepted,” the thinking goes.

While the Etiquetteist understands the argument, he finds it tweedy and uptight. And just because some starchy golfer gets his or her knickers in a twist doesn’t necessarily mean they’re right. That said, there is one instance when putting out a gimme is poor form, and that’s when it comes to pace of play.

Sometimes concessions aren’t offered as sporting gestures or strategic ploys. They’re offered simply to keep things moving. If your group is glacial and holding up everyone behind you, gimmes should be offered. And accepted. Grinding over a conceded two-footer while everyone else fidgets around you is poor etiquette, indeed. What’s more, it can also be poor strategy. Let’s say your partner concedes you a shortie, and you decide to stroke it anyway… and miss. You’ve just sealed your fate. No more gimmes. You’ll be asked to putt out everything for the rest of the day.

At that point, all etiquette questions go out the window. They’re the least of your worries. Your real troubles have only just begun.

A golf, food and travel writer, Josh Sens has been a GOLF Magazine contributor since 2004 and now contributes across all of GOLF’s platforms. His work has been anthologized in The Best American Sportswriting. He is also the co-author, with Sammy Hagar, of Are We Having Any Fun Yet: the Cooking and Partying Handbook.