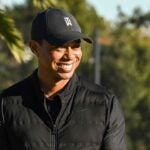 Tiger Woods at the 2021 Genesis Invitational, his last public appearance.

The last time we heard directly from Tiger Woods was a half-year ago, during the CBS broadcast of the Genesis Invitational, aka the L.A. Open, the venerable Tour stop at the Riviera Country Club. As it happens, Riviera is one of the few landmark Tour courses where Woods has not won.

When Tiger last spoke in public, it was on a Sunday afternoon but Woods, a month removed from his most recent back surgery, his fifth, wasn’t wearing his customary red Sunday shirt. He wears red on game-day Sundays. On this Sunday, he was a spectator and host and he was dressed in black.

On a still, sunny Los Angeles afternoon, Woods was wearing a black hat, a black or dark shirt and a black vest. He had, courtesy of CBS, a black headset on his ears, and a little black microphone suspended in front of his mouth, carefully placed to get his words out to the world. With Tiger, every word counts.

All the while, a TV camera was trained on him — on his face, and, most especially, on his eyes. He looked tired. Having a network lens pointed at you like that, capturing your every move, would be nerve-wracking for most of us, but for Woods it’s all he knows, really. Few lives have been more photographed — more documented, more public — than his.

We’re so accustomed to seeing Tiger, those of us in the slipstream of the game, that it becomes easy to forget an essential fact about him: He’s one of the most famous people in the world. Such fame comes at a cost. Fame doesn’t care if you’re a prince or a movie star or an athlete, it demands to be paid at regular intervals. As for Tiger, he’s in our lives. Did we really just go a half-year without hearing his voice, without seeing him do something live and unscripted? We did though it almost doesn’t seem possible.

Woods earned his place in our lives through the shots he played with the red light on, typically on Sundays. That gave him a certain level of wealth, a certain level of fame. But he multiplied his wealth and fame immeasurably by way of course openings, celebrity events, exhibitions, clinics, press conferences, autograph sessions, TV appearances, charity events, world travel, to say nothing of the many global advertising campaigns in which he starred.

Six months, no live Tiger. As a Tiger absence as a pro, it’s some sort of odd record. Anybody would understand why he would be desperate for a sabbatical, for a break, to get off the treadmill. But the sabbatical he got, of course, was not the one he wanted. We can only imagine the pain, the pain of every sort. We all know about his single-vehicle car crash, the one that could have taken his life. It came a day and a half after his last live public appearance, on that Sunday afternoon, at Riviera, courtesy of CBS.

In deference to pandemic protocols, Woods was in one place, on that Sunday, and his interlocutor, Jim Nantz, was in another. More memorably, and far more happily, they were seated beside each other on Masters Sunday in 2019, in the basement studio of Butler Cabin. Woods had just won his fifth green coat, and his 15th Grand Slam title. He was euphoric, reflective and expansive. Also precise.

If you’ve listened to Woods in his interviews over the years — and he’s done thousands — you probably know that he is often strikingly precise, alert and sharp. He says exactly what he intends to say, with almost every word in its proper place. But on that Sunday in February at Riviera, Woods wasn’t delivering in his typical way.

He told Nantz: “It’s just crazy, to see what they’re able to do, with no fans. There’s no energy. So they have to create it themselves. Whoever can create that energy, amongst your caddie-player relationship, and keep that going, be able to make your way up the leaderboard and even win tournaments.” No big deal. It just didn’t sound like the normal Tiger Woods.

The interview lasted seven minutes and Woods surely endured it — including various cutaways to shots played by Max Homa, Cameron Smith, Tony Finau and Jordan Spieth — out of obligation. The tournament was (and is) a fundraiser for his foundation. It was another required appearance in a life crowded with them, in a life crowded with obligations. Every time he signs a contract, obligations are attached. A key component to the fame-and-wealth game.

His life has to be far more complicated than we could know. He sweats details and his life is crammed with them. On Aug. 1, Woods “announced” that his annual December event in the Bahamas, the Hero World Championship, would take place this year after a one-year break, because of the pandemic, and that the field would be 20 players this year, two more than it had been. The actual news was no news: There was no suggestion, on his Twitter feed or his foundation’s website or anywhere else, about whether Woods would be playing, whether he thought playing might be even possible. In this case, no news was not good news.

His life has to be far more complicated than we could know. He sweats details and his life is crammed with them.

On Monday, Feb. 22, Woods did a day of shooting at Rolling Hills Country Club, for a series called “A Round with Tiger: Celebrity Playing Lessons” under the direction of director Peter Berg, working with the actor Jada Pinkett Smith, the basketball player Dwyane Wade and the comedian David Spade.

Early on the morning of Tuesday, Feb. 23, the course of Tiger’s life changed. Again. He left the hotel where he was staying, the oceanfront Terranea Resort, and began driving back to Rolling Hills for another day of shooting with Berg. While driving alone, and as fast as 87 miles per hour on a road marked for 45, Woods drove his car — a battle-ax of an SUV, made by Genesis, a luxury division of Hyundai — off a four-lane road and into a tree. A police report determined that Woods never used the brake pedal. The car was mangled. His body sustained serious injuries.

That’s not at all surprising. Woods takes many of his life cues from his father’s military training — he keeps his cards close to his vest. You can’t expect him to be a Michael Phelps, a Naomi Osaka, a Simone Biles, a Matthew Wolff. He’s not built for that. Deep in his DNA, athletic and human, is his unwillingness to show vulnerability. You can say what you want about the costs of going through life that way, but he’s the golfer with 82 PGA Tour wins, and nobody has more.

Tiger’s last tournament might have been, in an unconventional sense, the best of his life. That is, his seventh-place finish at the Father-Son event in Orlando in December, where Woods played with his 11-year-old son, Charlie. Woods seemed nervous in interviews — understandably so. He’s a single father who was putting his son’s golf game on public display. He was putting his son on public display. But on the course, you could not imagine a more engaged father, while giving Charlie all the room he needed. There was never a moment when Tiger micro-managed Charlie’s game or anything else. If anything, he did the opposite. We could see Woods as we had never seen him before. Every parent has his or her own methods, but Woods’s seemed to be exemplary.

On the final day, Woods’s daughter, Sam, and former wife, Elin, were walking outside the ropes alongside Woods’s girlfriend, Erica Herman. That was on Sunday, Dec. 20. Tiger Woods seemed happy. After all he had been through in his nearly 45 years? He seemed to be in a good place. Nobody knew what Tuesday, Feb. 23, would bring.

This is the least of it, but the next thing on his docket: We don’t know if Tiger will be on hand for next month’s Ryder Cup competition in Kohler, Wisc., where he had been expected to serve as an assistant U.S. captain.

I have written to Mark Steinberg, a trained lawyer and Woods’s longtime agent, via text and email, asking Tiger’s welfare, but to date have not received a response. That’s not surprising. No response either from Erica Herman, Tiger’s girlfriend, or Rob McNamara, an employee who is close to Woods.

In the meantime, the business of Tiger Woods continues, without Tiger Woods. During golf telecasts, you see him in TaylorMade ads. In press conferences, Rory McIlroy, Justin Thomas and Rickie Fowler have all commented on seeing Woods in person in his South Florida home, and reporting that he is recovering from his injuries. Tiger posted a photo of himself on crutches and gave a short interview to Golf Digest.

Most tellingly, GOLFTV, in concert with Golf Digest ­— both corporate partners of Tiger’s — has released three 22-minute episodes, one with Jada Pinkett Smith, another with Dwyane Wade, another with David Spade. Each runs with a preamble in the opening moments, white lettering on a black background. It reads:

“This series was filmed on February 22, 2021, the day before Tiger Woods’ car accident. We’re sharing this content with the blessing of Tiger and his guests.”

Maybe blessing is the perfect word for that sentence. Maybe not. It’s difficult to say. Regardless, it’s also difficult to imagine that contract lawyers were not involved in the release of the first three episodes. After all, there are lawyers all over Tiger’s life. Doctors, too. It wasn’t always that way for Tiger Woods but the kid some of us saw first make the scene 30 or so years ago is long gone and in his place is a middle-aged man with a life unlike anybody else’s.

Michael Bamberger may be reached at Michael.Bamberger@Golf.com

Michael Bamberger writes for GOLF Magazine and GOLF.com. Before that, he spent nearly 23 years as senior writer for Sports Illustrated. After college, he worked as a newspaper reporter, first for the (Martha’s) Vineyard Gazette, later for The Philadelphia Inquirer. He has written a variety of books about golf and other subjects, the most recent of which is The Second Life of Tiger Woods. His magazine work has been featured in multiple editions of The Best American Sports Writing. He holds a U.S. patent on The E-Club, a utility golf club. In 2016, he was given the Donald Ross Award by the American Society of Golf Course Architects, the organization’s highest honor.