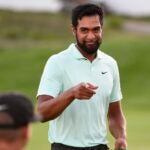 Tony Finau sharing in the celebration with his coach Boyd Summerhays.

One of the curious things about winning a golf tournament on the PGA Tour is how much talking you have to do in the moments — and days — that follow.

When Tony Finau won the Northern Trust on Monday, he spoke to CBS’s Amanda Balionis, then SkySports’ Henni Koyack. He accepted his trophy and spoke to tournament organizers and volunteers. He took questions from a gaggle of reporters, both in New Jersey and beyond.

Then came the wave. Finau opened his phone to more than a thousand messages of support and excitement. One caught his eye: A text from his boyhood hero, Tiger Woods.

“One of the very first was from Tiger, and that was a very special one. He was just explaining to me that he was proud of me and the fight and grit that I had,” Finau said ahead of the BMW Championship. “He was one of the first, which means he was watching, which for me is very, very cool.”

Messages poured in. From Utah hoopsters like Donovan Mitchell and Mike Conley, among “countless” other athletes. Utah’s governor reached out. Finau was overwhelmed and delighted. He tried to respond to as many as he could, late into the night.

On Wednesday, speaking to reporters again, Finau expressed just how much fun he’d had celebrating his victory. He described his celebratory steak dinner at Ruth’s Chris on Monday night, and his subsequent 3 a.m. McDonald’s run (Big Mac, double quarter-pounder with cheese, 10-piece chicken nuggets, large fries, Oreo McFlurry and a bottle of water, if you were wondering). He addressed his beard, which he was growing out until he won or made the Ryder Cup team. He’s now done both.

But mostly Finau reflected on what got him to this point. He touched on some technical stuff, details about taking spin off his wedges, a part of his game he wishes he’d honed earlier. But mostly it was about determination, about grit and about gratefulness.

“I’ve kind of starved a lot of my fans and supporters of a win for five years, so this one is special in that I’ve gained, I think, a lot of fans in these five years, and to be able to share this with so many people has been very, very special,” he said.

Here’s the thing about Finau doing all that talking: It’s captivating. It’s inspiring. It’s relentlessly positive. It makes you want to get out of your seat and start doing something, and going all in on that something. He has a clarity to his words that make difficult things seem doable. It’s contagious.

There are a few golfers, Rory McIlroy and Jordan Spieth among them, whom we admire for the way they speak honestly and openly. They give us a window into the mental fragility of professional golf and the difficulty of playing the game at the very highest level. With Finau it’s different. He’s honest, but it’s clear that he has steeled his mind to operate a specific, bulletproof way. Perhaps that has been a coping mechanism, dealing with so many near-misses this past half-decade. Perhaps it’s the mental toughness that got him to the PGA Tour in the first place.

“You know, I didn’t get discouraged,” he said. It was part of a longer answer about his mental toughness and perseverance, but it stuck out because of the matter-of-fact certainty with which he delivered it.

“It was more of the attitude of, ‘Okay, not quite good enough yet, keep working.’ That’s all it was. It was, ‘All right, keep doing what you’re doing, one foot in front of the other, and it’s going to happen.’ So I had to have that type of belief, but it was extremely hard to do that.”

That is the perseverance of Tony Finau. Believing in yourself is hard. Winning is hard. Working hard is hard.

Where does this attitude come from? Finau credits his faith as well as his upbringing, raised a Polynesian culture that he described as “very respectful and very loving.” But he traces his approach to golf back to his freshman year of high school, more than half his life ago. He was playing against a senior and, if he two-putted the final green, would tie for medalist honors. It would have been “a big deal,” Finau said.

He can tell the rest.

“I lag it up there from about 40 feet, lag it up to about five feet. I go on to lip that one out and then I go to tap it in, and because I was really frustrated that I had now missed the playoff, I missed that putt,” he said. Doubly frustrated, he missed another tap-in.

“I ended up five-putting the last green and stomping my feet around the hole just like acting like a child. My dad didn’t say a word to me, and my dad was my teacher and my hero. But he didn’t say a word to me when I left. I was grumpy, I got into the car, I was really, really upset. But just from that silence I understood what that meant to him, that that was not how he raised me. That’s not what champions do. That’s not how you act on a golf course.

“He actually didn’t say anything to me, but I was so disappointed in myself that I knew, I said, ‘That’s never going to happen again.’”

It hasn’t. Finau has been through plenty of disappointment. He’s come close and close and close. But he hasn’t given in to the temptation of negativity. To hear fellow pros tell it, Finau’s win was hugely popular in the locker room for one clear reason: they admire his attitude.

“He’s such a good guy,” Rory McIlroy said. “I’ve known Tony for over 20 years. He comes from a great family. He’s a wonderful person. Obviously he hadn’t won in a while, but he never complained. He just sticks his head down, goes about his business.”

Jon Rahm, whom Finau outdueled down the stretch on Monday, said it more succinctly.

“If you don’t like Tony Finau, there’s something seriously wrong with you.”

Doug Ferguson of the Associated Press put the question to Finau. Why do you think people like you so much? It clearly made him uncomfortable.

“I don’t know how to answer that,” he said. “I just know that I try my best to treat people the way that I would like to be treated. I always try to do that in a respectful way, no matter how I feel about what’s going on in my life.

“I think I’ve been able to take the losses on the chin with class, and that’s something that I was taught since I was a kid, no matter what, how things go, sportsmanship is very, very important. I want to be a light for those around me for exactly that.”

Then he delivered a few sentences that I won’t forget for a very long time. I’d suggest reading them twice, at least.

“If you want to be good at anything, you’re going to go through some really hard times. When you go through those, it’s okay to be nice. It’s okay to be kind, still. I never wanted to be one where golf was going to kill me. I’ve seen it happen to too many people where they let the game literally drive them crazy. I’ve never wanted that to be the case.”

When it was my turn to speak, I asked Finau if he’s taken any steps to block out negativity. Social media has increasingly driven public figures into uncertainty, doubt or worse. Plenty of fellow Tour pros have logged out of their accounts, stopped reading news stories and generally tried to limit exposure to media. Not Finau.

But somehow he took all of that and harnessed it into a Monday 65 in New Jersey. Now he’s a PGA Tour winner, once again. And he’s looking forward to what’s next. For you, too. Finau wants to be a light, after all. And it’s easiest to shine bright when he’s holding a trophy.

Dylan Dethier is a senior writer for GOLF Magazine/GOLF.com, The Williamstown, Mass. native joined GOLF in 2017 after two years scuffling on the mini-tours. Dethier is a 2014 graduate of Williams College, where he majored in English, and he’s the author of 18 in America, which details the year he spent as an 18-year-old living from his car and playing a round of golf in every state.