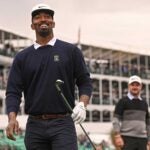 J.R. Smith played in the pro-am at the 2020 Waste Management Phoenix Open.

We’ve known for a long time that retired NBA star J.R. Smith is an avid golfer. We also know that his game is no joke. Believe it or not, the following sentence is not a joke either: J.R. Smith is about to start his competitive collegiate golf career.

Smith, who won NBA championships with the Cleveland Cavaliers and Los Angeles Lakers alongside LeBron James, recently started college classes at North Carolina A&T, with the plans of getting a liberal arts degree. He also hoped to play on the golf team, but approval from the NCAA regarding the 35-year-old’s eligibility was the final hurdle he had to navigate.

On Monday, that approval came.

After a standout high school basketball career, Smith initially planned to play college ball at the University of North Carolina. Instead, he chose to enter the 2004 NBA draft and was picked by the then-New Orleans Hornets at No. 18.

The NCAA bars athletes from competing in college sports if they’ve played in the pro ranks, but the rules only apply to the sport the player made money in professionally. Since Smith wanted to play on the golf team, and not the basketball team, the green light was given.

As the Associated press reports, Smith participated in an online press conference Monday, in which he revealed his excitement over his impending college career.

“It’s going to be fun. Obviously different environments from playing in front of 20,000 people to playing in a college golf gallery,” Smith said. “But it’s still as nerve-racking as shooting a free throw in front of 5,000 instead of making a 5-foot putt in front of three. So it all correlates the same for me.”

But Smith isn’t doing this only to play golf, he’s just as interested in focusing on his studies while at NC A&T. He’s already started classes, relating his experiences via his Twitter feed.

“It’s not even a week yet but as I get into it I keep getting eager to learn more, and join study groups and try to understand and try to really embrace the lifestyle,” he said. “Because if I’m going to give it a shot, that’s the only way it’s going to work.”

Smith received many congratulations when the news broke on Monday, perhaps none bigger than the one he received from his former teammate and NBA great James.

North Carolina A&T’s first tournament of the fall season is the Black College Golf Association Invitational on Sept. 24-25 at in Newman, Ga. We’ll have to wait and see whether or not Smith makes his college golf debut then.

As managing producer for GOLF.com, Cunningham edits, writes and publishes stories on GOLF.com, and manages the brand’s e-newsletters, which reach more than 1.4 million subscribers each month. A former two-time intern, he also helps keep GOLF.com humming outside the news-breaking stories and service content provided by our reporters and writers, and works with the tech team in the development of new products and innovative ways to deliver an engaging site to our audience.