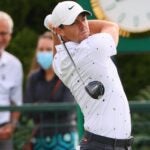 Look closely at the row of trees running alongside the 9th tee box at Liberty National Golf Club and you could find a free 3-wood that once belonged to Rory McIlroy. Seriously.

The four-time major winner has a history of snapping misbehaving clubs with brute strength and/or helicoptering them into a lake. On Monday at the Northern Trust, McIlroy found a new spot to deposit his unwanted gear when he chucked his 3-wood into the trees on No. 9 after his tee shot found the rough.

“I threw my 3-wood onto the New Jersey Turnpike off the 9th hole on Monday, and so I was without a 3-wood coming [to the BMW Championship,” McIlroy said during his pre-tournament press conference.

Assuming McIlroy’s old 3-wood is still in the trees, take our advice and avoid traipsing around the New Jersey Turnpike. According to Google Maps, the 9th tee at Liberty National is on the other side of Chapel Avenue, a two-lane road that dead-ends at the Hudson River.

If you live in the Jersey City area and have aspirations of claiming the wantaway 3-wood, McIlroy offered hope that it might still be hanging in the trees. Consider it a real-life version of Where’s Waldo — but with a 3-wood as the eventual goal.

Did some super-sleuthing and found the most likely spot where Rory’s 3-wood is located. It’s definitely not off the Jersey Turnpike, but rather in the trees near Chapel Avenue. Tried to drop a pin for the most likely spot. Good luck… pic.twitter.com/uuyDZtJ6eM

“I mightn’t have reached the road but I threw it into the trees off the 9th tee at Liberty National,” he said, “so if someone wants to go get a 3-wood, there’s one in there somewhere.”

As for McIlroy’s new 3-wood, he worked with TaylorMade reps on Tuesday to find a suitable replacement, along with a new driver.

“The driver I just felt was spinning a little too much last week,” he said. “so I just needed to get into something that wasn’t spinning as much, and that was really it. So going through a bunch of different heads and shafts as you saw yesterday, and feel like I landed on a good driver and got a pretty good 3-wood, too.”

Want to overhaul your bag for 2021? Find a fitting location near you at GOLF’s affiliate company True Spec Golf. For more on the latest gear news and information, check out our latest Fully Equipped podcast below.

Jonathan Wall is GOLF Magazine and GOLF.com’s Managing Editor for Equipment. Prior to joining the staff at the end of 2018, he spent 6 years covering equipment for the PGA Tour.