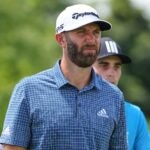 Dustin Johnson at The Northern Trust.

Golfers, like most professional athletes, get reputations for their interactions with the media.

Dustin Johnson also has quite the reputation for his interactions with the media. Cool, distant and uninterested are all words that have been thrown around concerning his public persona. But even with that reputation in mind, when the opportunity to chat with the No. 2-ranked golfer in the world came up, I jumped at the opportunity. It’s not every day you get to pick the brain of one of the most talented golfers in the world.

Heading into the call, I fully expected to be chatting with the DJ I’d become familiar with in press conferences throughout the years. But much to my surprise, the DJ I talked with was nothing like the aloof golfer he’s come to be characterized as. He was thoughtful and engaging throughout our 15-minute call, and I learned a lot, too.

Here are four tips he shared with me about golf.

Johnson has become known for his big, beautiful fades off the tee, so I asked him what it is about the left-to-right shot shape that suits his eye. He told me about a day at the end of 2015 when everything changed.

If you find a shot shape that’s working, stick with it.

Everyone has a go-to thought that they use to swing their best, and pros are no different. For Johnson, he likes to keep it simple.

“[My swing thought] can vary, but I like to only have one,” he said. “Generally if I have to think more than one thing, it’s not going to be a very good day.”

3. Get your wedges dialed in

Johnson has always been a capable player, but once he became one of the best wedge players in the world, he took his game to the next level. But that transformation with the wedges didn’t happen overnight. It took tons of grinding on the range with a Trackman by his side to achieve these heights — and it requires constant maintenance.

Before each round, the bulk of his warm-up routine is used making sure he knows exactly how far each wedge is flying. The exact carry distance of each wedge can vary by day, so Johnson likes to dial them in daily to make sure he can hunt flags efficiently.

4. Hydration is key to performance

With the amount of time Johnson spends outside in the sun, he must be extra conscientious of his hydration levels. If he’s not intaking the correct amount of fluids, his game will suffer.

“I drink BodyArmor all the time,” he said. “I’ve got to make sure I get all the nutrients and stuff I need in my body.”

All golfers would be wise to heed this advice.

Zephyr Melton is an assistant editor for GOLF.com where he spends his days blogging, producing and editing. Prior to joining the team at GOLF.com, he attended the University of Texas followed by stops with Team USA, the Green Bay Packers and the PGA Tour. He assists on all things instruction and is the staff’s self-appointed development tour “expert.”